This is the sermon I preached today at Putney Methodist Church. The Bible readings were Matthew 21:23-32 and Philippians 2:1-13.

It is very often hard for us, today, to step into the shoes of Jesus’ first audience. What was he like? What did he sound like? Why did people listen to him? Why did he make some people so angry? 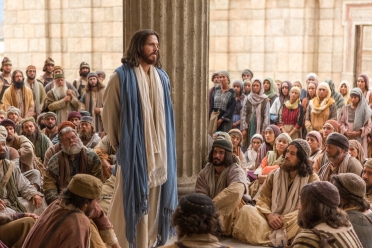 Today’s reading gives us some insight into those questions, and perhaps the key word is ‘authority’. “By what authority are you doing these things, and who gave you this authority?” (Matt.21:23) Those who held power at the time of Jesus, be they Jew or Gentile, religious or Roman, clearly felt threatened by Jesus; by what he said and how he said it. There were many rabbis and holy men in Jesus’ time but, even 2,000 years later, we can catch some of the astonishment that they felt. Mark records that one of the first crowds to hear Jesus was amazed by his natural aura of command: ‘they kept on asking one another, “What is this? A new teaching—with authority!’ (Mark 1:27). Jesus clearly taught in a very novel and striking way, and Matthew gives us a key clue earlier in his gospel as to what this meant: “for he taught them as one having authority, and not as their scribes.” (Matt. 7:29).

The crowds were used to hearing teachers, who based their authority to interpret scripture and apply it to everyday life effectively on the basis of their learning and their knowledge of previous teachers. “Rabbi so-and-so said this. Rabbi so-and-so said that. … Therefore, we can conclude that …”. Good scholarship no doubt but rather poor delivery! Jesus, instead, simply stood up in the marketplace or Temple and said, “Truly, truly, I say to you…”. He was his own authority. Sometimes he would point to the miracles that he had performed to support his claim to speak authoritatively but most often he would simply stand, in the power of the Father, and speak the truth. No one had heard such talk since the days of the prophets, and Jesus claimed far greater authority even than them. The authority to forgive sins; the authority to re-interpret scripture; the authority, even to claim a direct relationship with God. And as we all know, whenever someone claims authority, those who already hold power inevitably feel threatened.

Nearly two thousand years have passed since the incident we have heard about in today’s lesson took place yet in some respects, little has changed. We read today about the current Prime Minister’s struggle to assert her own authority; of plots and conspiracies by those who deny her authority to govern. In the field of politics, sport, business and many others, individuals go to great lengths to cement and extend their authority. They will attend talks and seminars about power-dressing, public speaking and creating the right first impression. In practice, though, we all know that some people can enter a room and simply carry with them an air of authority, and others cannot. 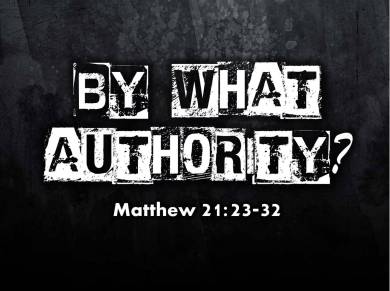 It is worth reflecting today on that key question of who has authority for you personally today? Who speaks, and you automatically listen? Many commentators today question whether there is anybody who possesses such authority, living as we do in a world where a person only has to open their mouth for a thousand other voices on social media to denounce and abuse them. I asked that question of myself. There are hundreds of Christian commentators and authors around today, and I could spend all day, everyday reading their views and opinions. To whom do I actually listen, though? Whose tweets or articles will I automatically read? Who carries authority for me?

Like those first hearers of Jesus’ words, I think I am looking for several things. First, I am looking for someone who can engage my attention and my interest. Jesus did not speak in long diatribes or write lengthy essays, with innumerable footnotes. He told stories that people could easily understand and remember, and which we are still re-telling today. He used everyday language and metaphors to which people could relate – stories about farmers, children, vineyards – and never spoke just to impress people with his vocabulary.

Third, he spoke with compassion. He did not speak like an uncaring overlord or an ideological zealot. He spoke with concern for those to whom he was speaking, often tempering his answers according to their individual needs. Always and everywhere, he spoke out of love, never pride or vanity.

Most importantly, though, he spoke with true humility. This characteristic is summed up in those beautiful words from St Pauls’ letter to the Philippians we heard earlier:

Let the same mind be in you that was in Christ Jesus, who, though he was in the form of God, did not regard equality with God as something to be exploited, but emptied himself (Phil. 2:5-7)

I have never been fond of people who have sought authority or power, for the sake of authority and power – and, sadly, I am sure we have all met too many of those people in our lives. For me, it is always those people who possess something of Christ’s humility that speak with the greatest authority. Those who speak with a recognition that any power they possess is held not to serve themselves, but others.

Jesus’ authority did not come because he wore fine robes and had grandiloquent sounding titles. It did not come because of his birth, his eloquence or his physical beauty. It came through his one-ness with God and ultimately his willingness to lay down even his own life to serve others. In an age obsessed with spin and image, let us seek out those who truly follow in his footsteps and speak with the authority of Christ. Amen.