This is the sermon I preached this evening on the Parable of the Talents, as it is generally called, at Putney Methodist Church. The text was Matthew 25:14-30. It challenges us all to reflect on the multiple meanings we find in the parables that Jesus told.

The meaning of this parable is clear. It’s all about stewardship. We can see clearly this when we understand the double meaning of ‘talent’. Like many ancient monetary units, such as a ‘shekel’, it originally meant a unit of weight. (In Revelation 16:21, we read of hailstones the weight of talents raining down in the apocalypse.) By Jesus’ time, though, it also referred to a specific amount of money. It’s fairly hard to quantify ancient amounts of currency in modern terms, but it would have been roughly enough to allow someone to live at a very basic level for 15 years. So, no mean amount of cash. In English, however, the Greek talantov has become our word ‘talent’, a word that carries a very different meaning to a simple sum of money. In fact, it is a meaning that is directly derived from this Biblical passage: “a special aptitude or faculty” (OED).

We can see, therefore, that this parable is a challenge to all Christians to consider not only how they use their money and resources but also their God-given talents and abilities. This powerful story – often used by churches during their stewardship campaigns – should make all Christians pause and reflect on how they spend their time and money. Ultimately, we believe that all things derive from God and his generous bounty; we owe our very existence to him. This powerful story reminds us very forcefully that we will be called to account for how we have used these gifts. It calls us to consider whether we should be supporting the work of Christ’s church more generously with our own resources. Are we being called to increase our giving? To volunteer to help with Sunday School? Even to commit our whole life to Christ’s service? It also reminds us, like the story of the widow’s gift (Mark 12:41-44), that the more resources and talents we have been blessed with, the more will be expected of us. “From everyone to whom much has been given, much will be required; and from the one to whom much has been entrusted, even more will be demanded” (Luke 12:48).

The meaning of this parable is clear. It’s all about subversive economics. We can see this clearly when we grapple with one of the most challenging elements of the parable: the figure of “the master” (25:19). We encounter many similar figures of authority in the parables that Jesus told – a father, a king, a vineyard owner, etc. On most occasions, we interpret these as allegorical representations of God the Father, and they tell us something about his character or nature. So, for example, the incredible act of forgiveness by the father in the parable of the prodigal son (Luke 15:11-32) tells us a great deal about what the love of God really means.

In this case, however, we really struggle to see how the master can possibly represent God. What does a “harsh” landowner (25:24), who reaps where he does not sow, have to do with the loving creator we encounter in Jesus Christ? This challenge has led many Biblical commentators to seek a different interpretation. One of the most novel is that of William Herzog II, who argues that the story, like many others Jesus told, is actually a searing indictment of his contemporary social and economic situation. Notably, the power of the aristocratic elite, who have gradually taken control of all the land and turned subsistence farmers into day labourers. Men who, like those we encounter in the parable of the vineyard workers (Matt. 20:1-16), are now utterly dependent upon the landowners for their daily bread. How did the landowner in this parable make his money, Herzog urges us to ponder? Through exploitation of his fields and workers; by squeezing every penny out of them and crushing any sign of dissent. And how did the first two servants earn such handsome returns for their master? Through exactly the same processes, or perhaps by charging outrageous interest on loans to desperate families. This is what he suggests that the poor third servant should have done (Matt. 25:27), even though this was strictly against the commandments of the Jewish faith (Exodus 22:24 and elsewhere).

Jesus told this parable, Herzog suggests, not to teach his first listeners but to evince understanding grunts of sympathy from them. They would have been only too familiar with characters like these, he suggests, exploitative masters and their paid lackeys. In this interpretation, the landowner praises the first two servants for being “effective exploiters of the peasants” and allows them to enter into his “joy”, i.e. share in the luxury of his court and benefit from the poverty and pain of others (Herzog II, 163). If this is true, then the speech of the third servant Matt. 25:24-25) is not a whining excuse but an incredibly brave and powerful piece of rhetoric. He denounces the cruelty and rapacity of his master in front of the entire household. Herzog argues that he is in fact enunciating what everyone else thinks about their cruel master. The Lukan parallel (Luke 19:11-27) arguably brings this out even more, making clear that the master’s subjects “hated him”. The third servant is, in modern parlance, a whistle-blower, exposing the cruelty of the system and its master. He is the “hero” of the piece: “By digging a hole and burying the aristocrat’s talent in the ground, he has taken it out of circulation. It cannot be used to dispossess more peasants from their lands through its dispersion in the form of usurious loans.” (Herzog II, 167) Sadly, the other members of the household refuse to see what they could achieve, if they united against this unjust tyrant. Instead, they throw him out into the cold, where the other landless peasants wail at their poverty and their teeth chatter through hunger (25:30). The parable urges all its listeners to resist such tyranny. 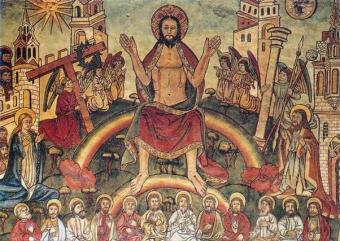 The meaning of this parable is clear. It’s all about eschatology – the end times. We can see this clearly when we examine the context of this parable in Matthew. It’s the third of four stories about the ‘eschaton’ (Greek for the ‘end times’ – hence eschatology) and the last judgement. All these passages dwell on the theme of being prepared and ready for a character who could return at any moment, a master, a king, a bridegroom. Don’t be caught sleeping, the stories warn their listeners.

In our parable, the “man going on a journey” who only returns after “a long time” (25:14, 19) is clearly Jesus. He is preparing the disciples for his imminent ascension back to heaven. He is warning them that they need to be ready for his return at any time, though. It reflects the early church’s near obsession with the Second Coming of Jesus (or ‘Parousia’), which they thought could happen at any minute. Many disciples could not understand why Jesus did not come back sooner (see Matt. 24:48, 25:5) but all the parables warn against becoming complacent. The Parable of the Talents warns them in unequivocal terms that Jesus – the master – will return, and when he does there will be a reckoning. Each disciple will be called to account for how he has used the talents and gifts he has been given, and judged accordingly. It is reminiscent of medieval doom paintings that show popes, princes and peasants at the last judgement, all being judged on the basis of the opportunities they had for doing good (and bad). It is a stern reminder to us all that none of us can escape a final judgement on our lives: on the evil we have done and the good we have not done. However long we live, however delayed the master’s return may be, we can never escape that final reckoning. Be warned, the parable warns its listeners, the master is coming!

The meaning of this parable is clear. It’s all about evangelism. We can see this clearly when we understand the over-arching call of Matthew’s gospel, which is summed up in its final verses: “Go therefore and make disciples of all nations” (Matt. 28:19). The precious treasure with which the servants have been entrusted is not gold but the gospel: the words of Jesus that hold the key to life itself. This treasure is not ours to keep, though, it is to be used for the benefit of the whole world, to liberate and enlighten everyone.

If we recognise this, we can see that the third servant’s sin is not laziness or neglect, rather it is fear. The fear of talking about the good news of Jesus Christ. It speaks directly to the modern church and our modern age, where so many Christians feel the temptation to treat faith and religion as a purely personal matter. It completely contradicts the notion of Christianity as a retreat, or an escape from the risky life around us.

It also reminds us that love and passion demand risk – be that in commercial endeavours, romance or becoming a parent. If we truly believe in the mission that has been entrusted to us, then we will risk everything for its sake, even being shunned by our friends and family. In so doing, we are emulating the risk that Jesus Christ took in his own ministry. As Jesus observes earlier in Matthew’s gospel:

“If any want to become my followers, let them deny themselves and take up their cross and follow me. For those who want to save their life will lose it, and those who lose their life for my sake will find it. For what will it profit them if they gain the whole world but forfeit their life?” (Matt. 16:24-26)

Only by being risk-takers, like the first two servants, may we hope to enter into our master’s joy and experience the full release of his liberating message. If we remain timid and uncertain, then we too shall find him a hard task-master indeed. As one commentator on this passage has observed: “The greatest risk of all, it turns out, is not to risk anything, not to care deeply and profoundly enough about anything to invest deeply, to give your heart away and in the process risk everything.” (John M Buchanan, Feasting on the Word)

This parable, like all those Jesus told, has been the subject of intense debate and discussion ever since he told it. And, of course, that is the point of a parable. If Jesus had wanted to be clear, he would have left us commandments and a precise manual on life, rather than a set of stories. They are meant to challenge and confuse us. They are meant to speak to us differently at different times and in different stages of our lives. How I read this parable today is not be the same as how I will read it in ten years’ time. Perhaps the answer is to ask ourselves which interpretation troubles us most? Which challenges my assumptions and prejudices? Which would I rather not hear? Arguably, it is precisely that interpretation that should be the starting point for our own understanding.