This is the sermon I preached today at Holy Trinity Roehampton Anglican Church, part of the Roehampton Ecumenical Parish. The set texts for this this day were Hebrews 5:1-10 and Mark 10:35-40. It was inspired, though, by the recent canonisation of the Central American priest and martyr Oscar Romero.

James and John in our lesson today dream of glory and power. They have seen the enormous crowds that Jesus draws, witnessed his miracles and can bask in the glow of his popularity. Like too many women and men over the centuries, they think too much of the benefits of following a great leader and too little of the costs. Jesus warns them, though about the realities of what they are asking for (Mark 10:38):

But Jesus said to them, “You do not know what you are asking. Are you able to drink the cup that I drink, or be baptised with the baptism that I am baptised with?”

Last week in Rome, enormous crowds gathered in St Peter’s Square to celebrate the life of a man who sought to follow in the footsteps of Christ but who paid the ultimate price for his discipleship. A man who truly drank the cup of sorrow and suffering that Christ drank from, and who, in so many ways, gave “his life [as] a ransom for many” (Mark 10:45). I am, of course, talking about the Central American priest and martyr, Oscar Romero, who was formally canonised last Sunday by Pope Francis. Saints and priests do not always figure highly in Methodist theology but Romero is a truly inspiring figure, from whom I believe we have much to learn.

Archbishop Oscar Romero, as he would eventually become, was born in 1917 in the impoverished Central American country of El Salvador. Before he was born, and during his lifetime, El Salvador endured chronic political and economic instability characterised by coups, revolts, and a succession of authoritarian rulers. Ultimately, this culminated in the devastating Salvadoran Civil War (1979–1992), which was fought between the military-led government and a coalition of left-wing guerrilla groups. Needless to say, it was, as always, the poor and marginalised who suffered most during these conflicts and even today the country continues to struggle with high rates of poverty, inequality and crime.

Romero was born in a poor, eastern province of El Salvador, and was one of seven children. He had a very basic schooling and his father taught him the noble skill of carpentry, as he thought he should have a trade in life. Early on, though, he displayed a vocation to the priesthood, and entered a seminary aged 13. After studying in Rome during the Second World War, he took up a simple parish priesthood and then served in the large city of San Miguel for 20 years before becoming a bishop, and ultimately Archbishop of the capital, San Salvador in 1979.

When he became Archbishop, many people in El Salvador were disappointed. They thought he was too bookish, too intellectual, too conservative. This may have been true but but his experiences among the poor and needy had changed him. In particular, one incident affected Romero deeply just a month after his appointment. That was the assassination of Rutilio Grande, a Jesuit priest and personal friend of Romero, who had been working diligently among the poor. Romero later stated: “When I looked at Rutilio lying there dead, I thought, ‘If they have killed him for doing what he did, then I too have to walk the same path’.”. Grande’s murder led to Romero revealing an activism that had not been evident earlier, speaking out against poverty, social injustice, assassinations and torture. A little later he would he make a famous speech that included words which still challenge all of God’s Church – including us here – today:

Meanwhile, national events were rapidly over-taking Romero and his country. In 1979, the Revolutionary Junta came to power amidst a wave of human rights abuses by paramilitary right-wing groups and the government in an escalation of violence that would soon become the Salvadoran Civil War. Romero criticized the United States for giving military aid to the new government and protested to President Jimmy Carter personally, but in vain.

Whilst others would have kept their heads down in such a difficult situation, Romero spoke out more and more about the terrible injustices he witnessed every day. In particular, he used the Catholic Church’s national radio station to preach a weekly sermon that soon garnered audiences of around 60% of the population. One reason for the sermons’ popularity was the fact that it was one of the very few places where people could actually hear what was going on in their nation. In these sermons, he would list disappearances, tortures, murders and much more each Sunday. The only time he stopped was when the radio station itself was bombed off the air, which happened more than once. 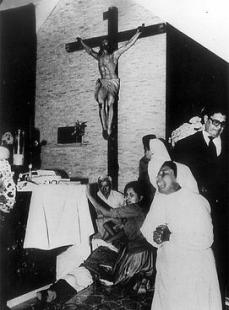 Ultimately, those in power decided that they had had enough of this ‘turbulent priest’. On the 23rd March, he gave a public sermon in which he called on Salvadoran soldiers, as Christians, to obey God’s higher order and to stop carrying out the government’s repression and violations of basic human rights. The following evening, he was celebrating communion at a tiny chapel in a Catholic hospital in the city, when armed militia men burst in and shot the Archbishop, while he was holding the chalice to bless the wine. The blood of Christ and Romero’s blood mingled together on the altar. His murderers were never – and have never been – brought to justice.

Romero’s life and sacrifice have not been forgotten. His words and his example continue to inspire people across the world. Not long ago, St Alban’s Abbey – a place that I am fairly sure Romero never even knew existed – unveiled seven new statues of martyrs on their rood screen. (The first such statuary to be installed in an English Cathedral since the Reformation.) Oscar Romero is one of those martyrs. 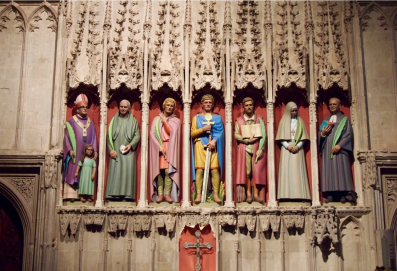 In 2014, he was officially beatified by the Catholic Church in a ceremony in San Salvador that attracted a congregation of a quarter of a million people. To the people of El Salvador, he was already known as ‘San Romero’ – Saint Romero. As I said, last week in Rome that status was officially confirmed, when he was canonised in an open-air ceremony presided over by his fellow South American, Pope Francis. It is interesting to note, though, that this ceremony has been a long time coming. For too many in the establishment, his words about the church’s responsibility to the poor and his attacks on the rich and powerful remained simply too controversial.

Like many other martyrs, Romero had a choice about the direction of his life. As I said earlier, he was by nature a quiet, bookish man. It would have been very tempting for him to stay in his study or at the university, reading and writing, and leading a quiet life. Even as archbishop, it would have been relatively easy for him to remain quiet – to ignore quietly the wicked deeds perpetrated around him and stay on good terms with the various political leaders of the day.

That same choice has faced God’s leaders and people ever since the day of James and John. Too many church leaders – not least in the 20th and 21st centuries – have preferred the easy path of glory and power. They have forgotten the stern words of Jesus in today’s passage (Mark 10:43-45):

In Oscar Romero, we see someone who took those words to heart. A man who, in the words of our other passage from Hebrews, was “subject to weakness” (Hebrew 5:2) as we all are. But who, as a faithful priest in the order of Melchizidek, was not afraid to witness with his very lifeblood to the liberating message of Christ Jesus.

If any person deserves the accolade of saint, then I think Oscar Romero does. I pray that we may be worthy of his example and follow in his footsteps of fearless witness and Christ-like sacrifice. I close with his words now:

And the people say: Amen! 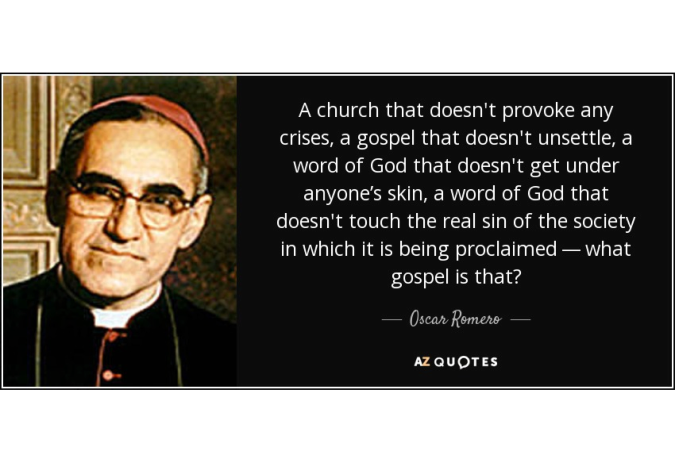 One thought on “Oscar Romero: an outspoken saint”