This is the sermon I delivered today at Holy Trinity Parish Church, part of the Ecumenical Parish of Roehampton. The set texts were Hebrews 11:29 – 12:2 and Luke 12:49-56. 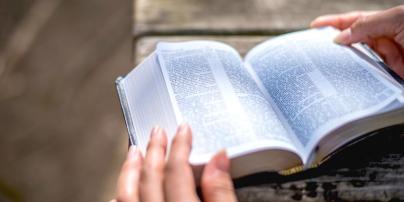 The lectionary is not always a gift to preachers! Today’s gospel reading seems particularly out of place and unhelpful at this time. All of us are only too conscious of the divisions in our society and our world at present, and our television screens seem to be full of angry people, protestors and arguing politicians. I wonder if I was alone when hearing that line, “From now on, five in one household will be divided, three against two” (Luke 12:52), in wondering whether Jesus was talking about Brexit! There are lots of families in this country who have had to ban that topic at all social occasions, I know, because of the divisions between generations and in-laws. Most of us probably believe that we need a leader who will bring us together, not drive us apart with a sword.

Of course, the text must be read in its own context. Jesus’ words may not have been too shocking to his first audience with their Messianic overtones and their possible allusion to the prophet Micah (Micah 7:6). We must also read them within the bigger picture of Christ’s work in reconciling humanity to God, and to one another. As Paul famously put it in: “through him God was pleased to reconcile to himself all things, whether on earth or in heaven” (Colossians 1:20). We must, however, take this reading seriously and not simply ignore it because it does not say what we want to hear.

I think one of the reasons I struggle so much with this text is because it goes against my own upbringing, where I often heard that very British adage: “Don’t make a fuss!”. We are often taught as children just to accept things as they are; not to complain; not to draw attention to ourselves. This gospel reading seems to fly right in the face of such parental strictures. 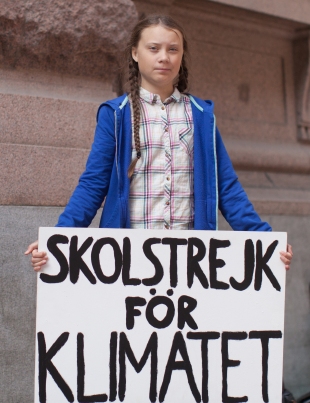 Wrestling with this passage during the week, I was struck by an article about a young woman whom you may have read about in your newspapers or seen on your television screens. That is the Swedish teenager Greta Thunberg. This young woman came to public attention when, aged 15, she began protesting outside the Swedish parliament about the need for immediate action to combat climate change. Her ‘school strike for the climate’ struck a chord nationally and globally almost immediately, and she attracted a huge amount of media interest. In March of this year, around 1.4 million students across the globe joined her strike, and that was repeated by even more young people in May, and more strikes are planned. She has been invited to speak to numerous audiences across the world, including presidents, parliaments and politicians, and the media are talking about the ‘Greta Thunberg’ effect on the international debate about the Climate Crisis. Swedish Railways are already crediting her with a marked increase in the number of people switching from planes to trains for internal journeys, for example.

Most recently, she was in the press, and therefore in my mind, this week because she is heading to the UN climate summit in New York. She has refused to fly, though, and contribute yet more to the world’s ever-increasing carbon emissions. So instead, on Tuesday she set sail from Plymouth on a racing yacht, which is fitted with solar panels and underwater turbines to create some electricity. The small boat has very few creature comforts, though, and the two-week voyage will be a long and uncomfortable one in very cramped conditions. We can only pray for a safe voyage. 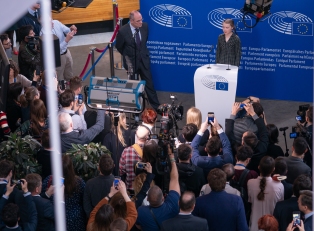 Several things struck me about this story in the light of our reading today. The first is the character of Greta herself. Aged 11, she apparently became depressed and stopped talking. Later on, she was diagnosed with Asperger syndrome, obsessive–compulsive disorder (OCD), and selective mutism. She later commented that these seeming disabilities were actually beneficial. The selective mutism meant she spoke only when she needed to and that “now is one of those moments”, and that being on the autistic ‘spectrum’ was an advantage “as almost everything is black or white”. She saw the terrible effect that humans are having on the climate and she simply could not understand why her parents, teachers and other adults, who knew more about it than she did, shared her concern but simply shrugged their shoulders and refused to act.

I make no comment about the mental health of our Lord, of course, but I think she may have shared some of those characteristics with Jesus. He too only seemed to speak when he had something important to say, and almost certainly saw good and evil in much sharper terms than we often do. Too often, I fear, we think of ‘gentles Jesus meek and mild’ but when we read passages like this one today we see clearly how Christ spoke with a clarity and a lack of fear that puts nearly all contemporary politicians to shame.

The second thing that struck me about the story was the newspaper’s anticipation of how Greta would be treated when she arrived in the USA. There will no doubt be crowds to greet her and her solar-powered yacht on the quayside in New York. She has already appeared on the cover of Time and other magazines, and she has received thousands of invitations to speak globally. There are many others, though, who have violently attacked her. Unsurprisingly, OPEC has denounced her “unscientific attacks” as a grave threat to the global oil industry. Numerous right-wing commentators, including those in this country, have launched vicious personal attacks on her and her medical conditions. One journalist from Fox News recently described her as an “ignorant teenage climate puppet”. Sadly, these personal attacks will only increase over time, I fear. Just like Jesus, she knows that her message is a deeply divisive one that will provoke strong reactions and even anger and violence against herself.

Pondering all this, I began to wonder if Jesus’ words here in Luke did not so much reflect his desire to provoke controversy and discord, but rather the certainty that he would inevitably provoke such diverse reactions. Repeatedly in his ministry, he pointed to prophets who had gone before him, who had so often been bitterly rejected and even killed because they brought unwelcome messages from God (for example, Matt 23:35). Most recently for his audience, of course, was the example of the out-spoken John the Baptist, who had been hailed as the first great prophet in three centuries by so many of Jesus’ contemporaries but who was simultaneously despised and ultimately executed by those in power. In his own life, as we know only too well, Jesus would earn the rapturous welcome of some and the cries of ‘Crucify, crucify!’ from others. Jesus knew only too well that his destiny was not to be universally loved and lionised, but to divide opinion and bring about violence and death – principally for himself.

If we turn our mind to the centuries that have followed on from Jesus, and to that great “cloud of witnesses” (Heb. 12:1) – the saints and martyrs of two millennia – how many of them have been the cause of bitter hostility and division? How many of them have bravely spoken truth to power, and in return faced violence and the sword? How many of the things that we truly value in this world today – our freedom to worship, our democracy, our rights as human beings – have come about because of those who were willing to stand up for the values of God’s Kingdom and risk the hostility of others? The examples come thick and fast.

As we worship here in Roehampton today, we are part of a Christian family that stretched around the globe. A few hours ago, our brothers and sister in the South Pacific were at their various churches singing God’s praises. As the recent climate summit in Tuvalu demonstrated, those worshippers are only too aware that they and their nations will be among the first to see the full impact of humanity’s disastrous impact upon the climate, as their islands slowly disappear under the Pacific waves. As always, it is the poorest and most disadvantaged in our world who will face the worst impact of humanity’s greed. And we have to ask ourselves, “Is that God’s will for his creation?”. Are we being true to the values of the Kingdom of God that Christ died on his cross to pronounce, if we let those people become destitute because they are foreigners living far away. Unless we change our ways as a planet, unless we heed the calls of those difficult people, who will not be silenced, like Greta Thunberg, and risk division and rancour, what will change?

Christ does not call us to seek division in this world. He calls us to be reconcilers, mediators and to love all people. But our gospel reading today remind us all very clearly that he does not call just to be silent in the face of injustice, of evil and of all that denies God. If we wish to be counted as part of Christ’s flock, then we are called to take up his cross and bear witness to the love of God made real. To be the difficult people who refuse to be silenced by those in power. To be God’s voice here and now. May we know the power and the courage of Christ to be that voice today and always. Amen.

Postscript: After the service, several people said they had found this sermon helpful, one person strongly criticised it, and most people said nothing. I was a little upset at first about this reaction but then I reflected – that’s really what Jesus was warning us about wasn’t it?