This is a sermon I preached recently about one of the most famous passages of scripture, where Jesus describes himself as the “good shepherd”: John 10: 1-10. 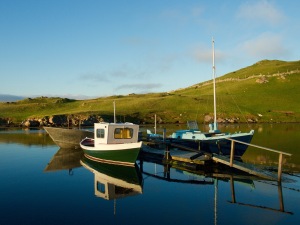 Last year, we spent a lovely week on the Shetland Islands. I cannot recommend them to you enough and would happily take up a role on the Shetland Tourist Board, if I could! The stunning scenery, the incredible wildlife and the welcoming people, make it a wonderful place to visit.

One day while we there, we were walking on the hills near our holiday cottage and I suddenly spotted something that made me stop and grab my camera. “Look!” I said to my partner, “Look, a sheep-fold!”. He was rather bemused by my excitement at what appeared to be a small square enclosure of dry-stone wall, much like the other walls around it. I was excited, though, because, after a lifetime of reading the Bible, I had finally seen a sheep-fold: something I had heard about numerous times in lessons from Sunday School and church. “Very truly, I tell you,” says Jesus in John’s gospel, “anyone who does not enter the sheepfold by the gate but climbs in by another way is a thief and a bandit. … I am the gate for the sheep.” (John 10:1, 7) And, after all those years of hearing this passage read and sheep-folds described by preachers, I had finally seen one for myself. 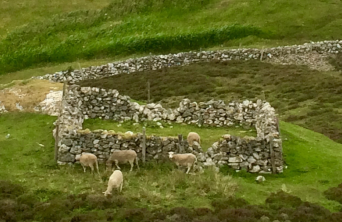 There is nothing incredibly remarkable about a sheep-fold, it must be said, and perhaps that explains my partner’s bemused reaction. It is a simply an enclosure in which sheep are kept. Sometimes that may be simply to get them together before moving them on, for example, or vaccinating them. In Jesus’ time, though, – and still in some places today – it is where the sheep would be gathered at night by their shepherds to keep them safe from wild animals and thieves. A safe haven in the darkness.

My reaction to seeing a sheep-fold, though, helps to explain one of the chief problems we have in understanding this passage today. In 42 years, I have only consciously seen one sheep-fold, and incidentally only met one real shepherd. For Jesus’ first hearers, though, sheep, sheep-folds, shepherds and the whole cycle of agricultural life were an integral part of their lives. Even town-dwellers would generally only have been a generation or so away from rural life, and would certainly have had much more connection with the natural world than we do today. That is why Jesus used the analogies that he did, such as the shepherd and the sheepfold, to describe himself and the Kingdom of God. Metaphors and similes that would have been very easily understood and remembered by his first hearers. Today, sadly, such imagery can leave people baffled and bemused, and present real barriers to our understanding of his message of good news for all people.

What we need to recognise is that Jesus is here talking about a subject that affects all of humanity, today as much as 2,000 years ago. Leadership. He is talking about what kind of leader he was, and contrasting himself directly to the failed leaders of his own day.

Again, his message would have been clearer to his first audience because they would have picked up the clues within the text. The kings of Israel are often referred in our Old Testament as shepherds. In part, this stemmed from king David, who was taken from caring for his sheep to become Israel’s greatest ruler (1 Sam. 16):

He chose his servant David,
and took him from the sheepfolds;
from tending the nursing ewes he brought him
to be the shepherd of his people Jacob,
of Israel, his inheritance.
With upright heart he tended them,
and guided them with skilful hand. (Psalm 78:70-1)

Like the later Persian king Cyrus, David was a good shepherd of his flock (Isa. 44:28). But too many of the kings of Israel were a disaster for their people and were roundly condemned by prophets like Jeremiah as false shepherds:

They had forgotten that God was the true shepherd of his people (Psalm 23) and would not let them go unprotected and uncared for. He would raise up a new shepherd, in the lineage of David, who would restore the flock:

In passages like this from John’s gospel, Jesus lays claim to that prophecy. He is the true shepherd of the people, descended from David, who will lead his people. God has sent his own son to give hope and true leadership to his beloved creation.

This is already a dramatic claim but Jesus goes further and draws a distinction between the kind of leader he is and the leaders of his own time. Of these he says, “All who came before me are thieves and bandits; but the sheep did not listen to them.” (John 10:8). Who is talking about? On the hand, he is probably talking about the zealots and revolutionaries who were leading the people into disastrous rebellions against the Romans. Rebellions that would eventually lead to the great Jewish Revolt (66-73 AD) and disaster for the whole people. On the other, he was also targeting that dreadful dynasty, the Herodians. The family of the vicious and cruel King Herod the Great; men like Herod Antipas who had had John the Baptist executed (Matthew 14:6-11). They were no true kings and were deservedly loathed by the people.

This is where the sheep-fold analogy really kicks in. In many such folds, there is no gate but merely a gap in the wall to allow the flock in and out. At night, a true shepherd would lay down in front of the gap to protect the sheep with his own body and keep them safe. Although, it has lost some of its resonance because of the passage of time, the power of the image – of a leader literally laying down in the dirt for those whom he loves – remains undimmed.

This ancient metaphor of the true leadership of Christ is perhaps more pertinent than ever today as, once again, our nation prepares for a General Election. As our politicians strut before the nation’s media, it should give us reason to ponder and reflect what it is we truly want from a leader. I am often struck by how if you ask people what they want from a leader, the responses will so often be very similar: integrity, honesty, conviction, etc. But too often we vote for someone who is completely different. Too often we prefer the “strong man” to a gentle, loving shepherd. Too often, we actually prize characteristics like physical appearance, eloquence and the repetition of our favourite stereotypes to anything else. If Jesus were standing for prime minister today, would we actually vote for him?

And the question could equally apply to leadership in so many different areas of life: local government, business, even the church. What sort of leaders do we say we want, and which do we really want? When I hear people grumble about politicians and others, I am often tempted to reply with that very sound maxim, we get the leaders we deserve!

In this election and at all times, let us reflect upon the model of leadership that Jesus spoke about in this passage and which, more importantly, he modelled in his own life. A leadership based not on fear, dogma, hatred or the love of power, but one that’s sole aim was that we might “have life, and have it abundantly” (John 10:10). Let us choose women and men on that basis, who seek the good of the whole flock and not just the shepherd. But most importantly, let us always place our ultimate faith in our one true shepherd, Jesus Christ, who will always love us and who will never lead us astray. The leader who did not send others to their death while remaining safe and aloof but who truly laid down his life for their sake. That is the kind of leader who will never betray our trust and whom we can be sure will one day lead us all safely home to our eternal sheepfold. Amen.

My Tweets
"They are not just idle words for you—they are your life. By them you will live long in the land you are crossing the Jordan to possess.” (Deuteronomy 32:47)
%d bloggers like this: